Cooling the Cloud, One Data Center at a Time

In my last post, I discussed how we're reducing acoustic levels for equipment that cools today's fast, high-powered computer systems. Today, I'm exploring the other side of the equation: heat reduction.

In our world of growing cloud-based services, users want more online storage, faster video streaming and quicker access to information. In a recent article in The Data Center Journal, Jeff Clark discusses how, as energy prices and demand for cloud services increase, the demand for efficient systems to save data center floor and rack space is also growing.

With an increase in rack density – both in power and airflow impedance – the challenge of keeping these systems cool while still remaining within old standards limitations is becoming significant. The dilemma? How to keep one’s data center upgrade costs low while providing the additional cooling that’s essential for higher-power density equipment which can now approach 20+ kilowatts per rack.

As cloud-based services continue to grow, ebm-papst continues to refine technologies that help maximize cooling capacity of our air movers to meet a wide range of data center requirements. Whether it’s our new line of highly efficient compact RadiCal impellers or high-pressure capable axial fans, such as our new DV6300 series, we are always pushing the improvement curve.

Have you experienced any of the above cooling challenges in your IT/Telecom applications? If so, how did you resolve them? What solutions did you choose moving forward? We welcome your feedback in the comments box below!

As a longtime corporate member, ebm-papst has actively participated in AMCA’s events and worked on its committees. Because fans and turbomachinery play an important role in aircraft engines, power plant turbines and many other applications that would be discussed at IGTI and ASME, this year AMCA decided to co-locate and co-time its conference to allow cross-pollination of ideas and expertise with the other two events.

The AMCA schedule included Wolfgang’s presentation, “Numerical Investigation of Axial Fans in Serial Connection,” that discussed his team’s research on two-stage setups of compact cooling fans, which are used widely in electronic telecom and computing equipment. These connected fans operate mostly at part load. If one fan fails, the remaining fan will speed up to avoid a local pressure drop or recirculation in the application.

Our team proved how a proper arrangement of two axial fans will increase both fan pressure rise and flow rate. This type of arrangement would benefit air flow through the system & enhance cooling.

Dr. Michael Schmitz, manager of aerodynamics and simulation research and development at ebm-papst-St. Georgen, is a member of IGTI’s recently created Fans and Blowers Committee. The papers sponsored by this committee highlighted fan technologies in hovercrafts and fan sound reduction techniques for locomotives. One researcher provided bio mimetic studies involving fan blades with leading-edge bumps similar to the tubercles of humpback whales. Another analyzed the tip-clearance noise of axial fans, comparing experiments with numerical simulation. Another IGTI paper discussed inverse design methodology for fans and blowers driven by a genetic algorithm. 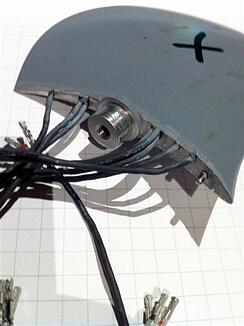 Other topics presented at the conference included computational fan development, innovations such as a carbon-fiber bladed fan for abrasive air streams and a pair of fire-resistant, reversible tunnel ventilation fans.

A talk about permanent magnet fan motors provided a welcome refresher. In 2004, ebm-papst Inc. won the AHR Expo Innovation Award for incorporating magnetic drive technology in fans up to 50 in. diameter and 12 kW electrical input, which expanded products to a wide variety of HVAC/R applications that can benefit from these advances.  The exhibition rounded off our days with hands-on demonstrations, follow-up discussions and networking opportunities.

What innovations in fan technology are benefiting your business environment? What areas can be improved for your application’s air-moving requirements? We’d love to hear from you – leave a comment and message below.

AxiTop - Listen to the Difference

Take a walk outdoors in any suburban area and it is difficult to avoid the sounds created by the mechanical inventions in our modern society.  The drone of an aircraft passing overhead, the rush of vehicles from a busy street or the buzz of a lawnmower in the neighbor's yard create a measurable soundtrack to our daily activities.  Most of us are pleasantly surprised by just how quiet it becomes when these sounds suddenly stop and we are exposed to the underlying level of quiet that is present.  We cannot eliminate these noises entirely, but by applying our GreenTech philosophy of continuous design improvement during our product development, ebm-papst can again help engineers create air moving systems that are found outdoors that we can comfortably live with.

In congested cities, with living spaces adjacent to supermarkets and small industry, the need for quiet operation is not just desired, it is mandatory by local codes.   Fans that are used to move large amounts of air to cool our mechanical equipment or keep our refrigeration systems running are necessary components in the systems that are placed on rooftops and the outside of our buildings.  Engineers and designers work very hard to meet the strict guidelines that are put in place to limit noise but these restrictions can negatively affect their final designs.

To lower noise in these applications, there are standard "fixes" that the designer can call upon to help meet the required noise and performance levels.  With axial fans, the common fix is to reduce the motor RPM and increase the number of fans to handle the air performance needs and or increase the blade size.  These solutions can lead to a reduction in system performance, add components increase the system footprint and increase energy consumption.   Not an appealing solution with today's high electrical costs, small installation areas and increased refrigeration costs.  Even worse, in many cases, these changes are not always effective and further fixes must be done on site where additional changes are even more costly.

AxiTop from ebm-papst, a leader in air moving technology, offers a groundbreaking solution.  We have combined our high efficiency AC and EC axial fans with a passive diffuser assembled in one complete package to help simplify installations.  Our optimized AxiTop design has been shown to reduce noise lower energy consumption when installed in typical applications.  Integration of this assembly is simple.  The fan and diffuser are delivered as a complete assembly that can easily be integrated into an existing design using our standard square wall plate.  Or custom wall plates are available so that the AxiTop fan assembly can be integrated seamlessly into your air handling system.

AxiTop is currently available worldwide in 800 and 910mm diameter axial fans.  These popular sizes are perfectly suited for use on rooftop condensers, fluid coolers, and agricultural ventilation applications.

If you need a real solution to meet applications with low noise requirements and at the same time reduce total cost of ownership and simplify your design, our AxiTop product line provides an answer!

Please visit us at booth #2967 at the upcoming AHR Expo in Dallas, TX, to see the AxiTop units on display and for a complete overview of this exciting new product. Or contact us at sales@us.ebmpapst.com to review the benefits of using AxiTop.

What did that fan say? A few words from our W3GZ50 Axial fan.

Our definition of "Giant" is continually evolving here at ebm-papst.  Our new W3GZ50 series EC axial fan has a 1250mm (49.2 inch) blade diameter and is currently the world's largest diameter EC air mover with integrated electronics!

Just like the other products in our EC giant line up, this new axial fan was designed from the beginning to be energy efficient, simple to use and able to be installed in a variety of air moving applications.  It can easily be customized by the end user so that it is a perfect match for use with refrigeration condensers, chiller applications or large scale ventilation applications.  Its large size allows you to reduce the number of smaller fans used.

This air mover has an impressive list of features to match its size.

-Air performance- the direct drive motor and blade combination are able to produce over 38,000 CFM and can operate efficiently with backpressure levels of up to 0.8 inches of water.

-Factory balanced blade - the rotating motor and blades are balanced as a complete assembly on the production floor to insure a smooth operation.

-Accepts traditional control inputs - So that you can fully speed control this fan in your application, our integrated electronics will accept a variety of control inputs.   For a simple set up, this means that you can use either a 0-10VDC input, 0-100% PWM input, or a 4-20mA input from an outside controller to completely vary the speed of the fan.

-RS485 Modbus RTU protocol ready - Many of the previously mute devices that are part of our daily lives are starting to become vocal whether we like it or not!  Our cars, heating systems and even our home refrigerators are now capable of telling us what condition they are in with texts and e mails.  Our lineup of EC Giants that are over 500 Watts are ready to be heard as well!  If you would like this fan to be a vocal participant in your assembly, it is simple to establish two-way communication using the on board RS485 Modbus RTU protocol.   Not only can you command it what RPM to run at, but you can obtain the run hours, the specific alarm status, internal motor temperature and many other bits of information that will keep you informed and up to date for critical applications.   Our ongoing partnerships with key worldwide controls manufacturers make incorporating  digital communication  easier than ever before.

-Built in PID controller- for ultimate flexibility, our built in process controller allows you to program this unit to run independently without the need for a separate process controller to handle common field tasks.  For example, when programmed to operate in closed loop sensor mode with your supplied temperature, pressure or other sensor, the fan will maintain a process specific set point.  Simply set the sensor parameters and how quickly you want the fan to respond and the process controller will take it from there.  The set point can be either entered using software to prevent unauthorized changes or from an accessible potentiometer for simple adjustments by anyone in the field.  This powerful feature is a perfect way to reduce components in your overall assembly.  Even if you choose to not use this feature as the main process controller, it can easily be programmed and can remain dormant in the background as a back up to the main process controller.

These are just some of the advanced features that this exciting new product has to help simplify your larger air moving projects.

We welcome you to come see this impressive fan and all of our equally advanced products on display at the AHR Expo in Dallas.