Commercial food equipment engineers are always on the look out for opportunities to improve the cooking performance of their gas fired appliances; therefore, recent industry design trends are taking a page from the comfort heating industry’s, condensing boiler technology. For more than 20 years the comfort heating industry has been perfecting the gas-air ratio control (GARC) system to modulate the combustion energy to the heat demand of the home, optimizing efficiency and reducing energy consumption. Now these same GARC assemblies are being applied to today’s gas fired commercial cooking applications for combi-ovens, conveyor ovens, and fryers. 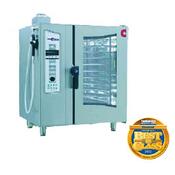 Combi-ovens offer chefs the opportunity to utilize in one appliance three cooking modes while precisely maintaining the cooking temperature for (a) convective cooking, (b) steam cooking, and a (c) combination steam and convective cooking.  This multi-operational design is applied to counter-top to floor standing combi appliances that satisfy the demands of a small restaurant to a large institutional kitchen. The GARC technology allows for all three of these modes to existing in a fast acting but controlled release of energy that more efficiently cooks the food products.

Gas fired fryers also utilize the modulating GARC technology to respond to changes in load demand while offering precise temperature control of the oil for cooking and warm-up profiles. The GARC assembly is made of three main components: a premix ready gas blower, air-fuel mixer (venturi), and zero governor gas valve. The combination of all three of these components allows for the precise control of gas and air to be delivered to the burner in a constant ratio that also allow for variable gas-air input by speed controlling the blower.

This gas-air ratio control provides a pneumatic coupling between the blower and the gas valve via the venturi allow for the gas and air to be modulated by sending a variable speed signal to the blower motor. The result of this modulating combustion technology applied to cooking appliances is the precise temperature control, rapid response to load changes, and energy conservation during off peak hours that benefit either the restaurant owner, chef, or customer.

To learn more about this technology, please don’t hesitate to contact ebm-papst sales or marketing.

Making life easier for boiler OEMs and their residential customers

Selecting, purchasing and integrating parts from many suppliers is a really cumbersome method to create gas-air-control (GARC) systems. But as far as anyone can remember, that’s exactly the way many original equipment/appliance manufacturers (OEMs) have assembled condensing boiler systems for their residential customers.

Over the years, ebm-papst’s role in this process has been to supply premix gas blowers as part of the overall GARC assemblies.

Enno Vroljik, who runs gas valve production for ebm-papst’s European and North American operations, knew there had to be a better way. Enno joined ebm-papst in 2010 and brought with him more than 20 years of gas valve development experience from Honeywell, located in the Netherlands. 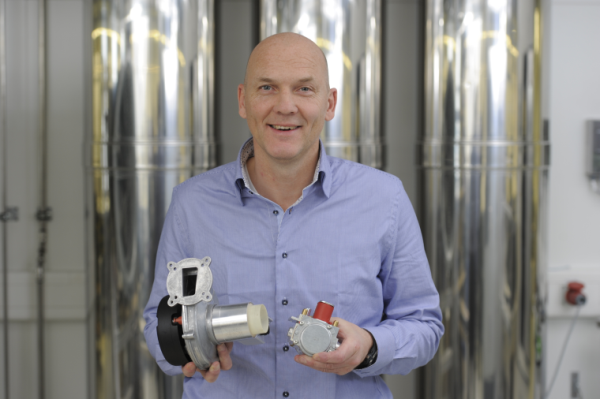 To make life easier for our OEM partners and speed delivery of condensing boiler systems to their residential customers, Vroljik and his engineering team have developed a pre-assembled GARC system called the NRV Series.

Developed for residential condensing boilers rated up to 150 MBTU/H (45 kW), the NRV Series includes an NRG118 premix gas blower, mutli-venturi and GB 055 E01 gas valve that can be configured, pre-adjusted and supplied to customers as a turn-key GARC assembly.

As shown below, the NRV118 GARC assembly allows for the gas valve to be mounted in three different positions and the venturi to be rotated into six positions.

Vroljik and his crew aren’t done yet: They’re putting the final touches on NRV Series products for appliances rated up to 500 MBTU/H (150 kW). These will be launched in January at the AHR Expo 2013 in Dallas. Stop by our booth (#2967) to check out these new NRV systems, or contact us at sales@us.ebmpapst.com.